I visited an artisan, Toshio Toda who is Edo joinery (or “Edo Sashimono” in Japanese) master. Edo joinery is designated as a traditional craft by the Minister of Economy, Trade and Industry.

In Sashimono, or wood joinery, some pieces of woods are joined together facing each other. It is said that the Japanese name Sashimono came from that action. In Shogi, we use a Japanese word, “Sasu” to describe an action of moving a piece. Sashimono and Shogi have a word “Sasu” in common. As a professional Shogi player, I already had a sense of intimacy to “Sashimono.”
(“Shashimono” is a compound word of “Sasu,” a verb with original meaning of pointing, and “mono,” a noun meaning an object. “Shashi” in “Shashimono” is verb conjugation of “Sasu”. Basically, when Japanese verb is combined with another word, the ending of the verb is declined. )

Looking for Toda’s workshop, I found the place where there were scores of woods around its entrance. I got to his place without a big trouble to find. 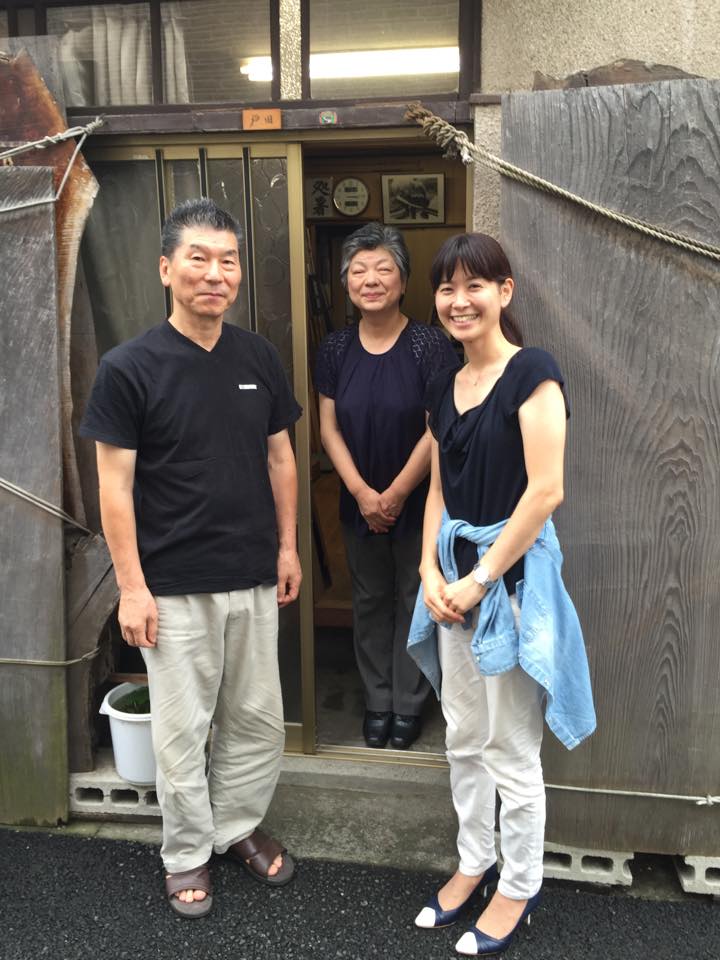 When Toda was in the six grade of elementary school, he got in this line of work. Watching and being fascinated by a neighbor’s beautiful house-raisin, he made up his mind to become a carpenter. Then later, he was guided by some curious coincidences to the world of Edo joinery. 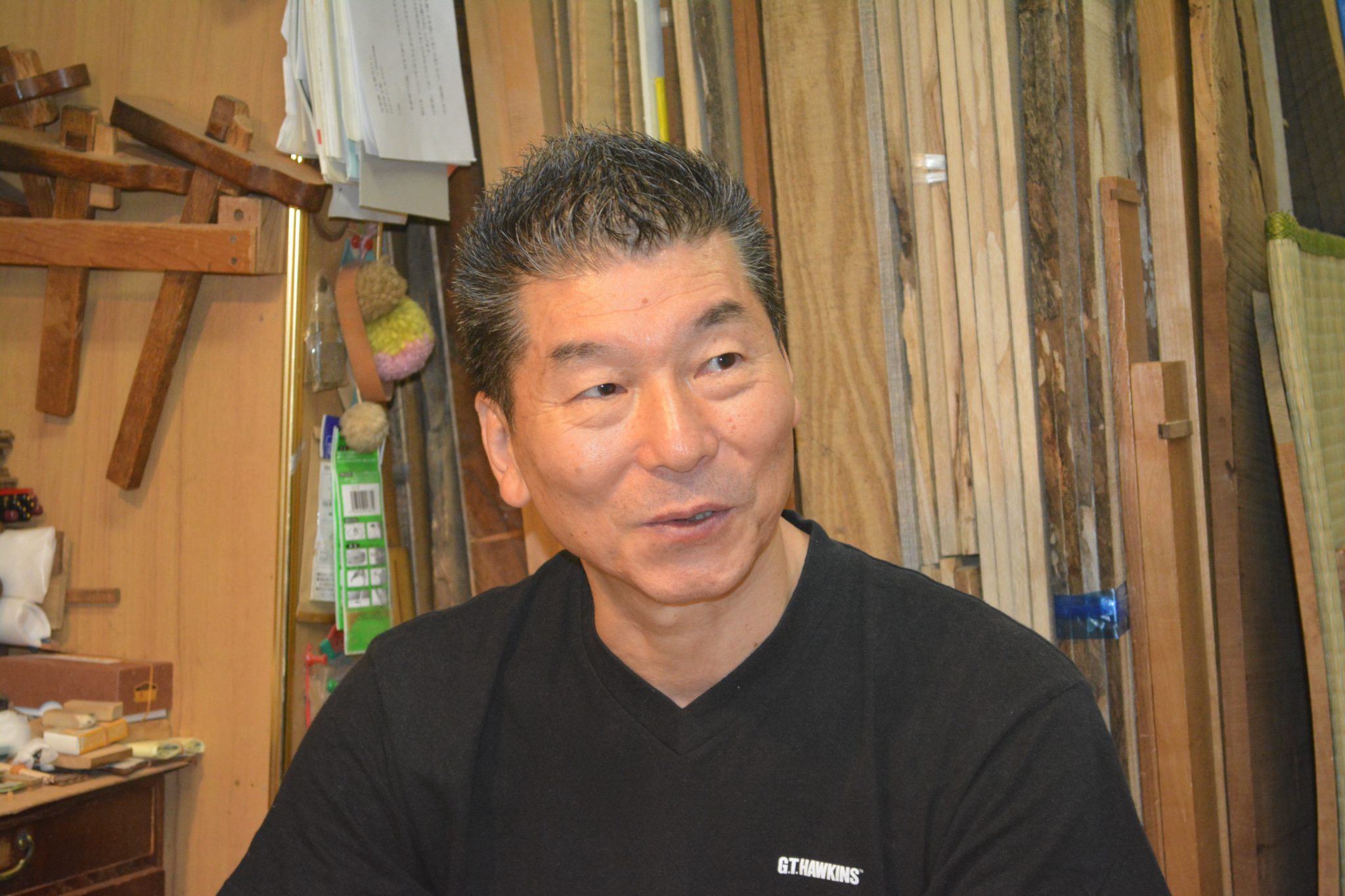 At age of 18, he moved to Tokyo from Chiba Pref. and became an apprentice under “Oyakata (master)” to study Edo joinery.
I mention the world of Shogi briefly here. We, in the world of Shogi, also had the system of apprentice who live in a house of a master and are trained as a private pupil. However, due to changes of housing conditions or lifestyles, this system has become scarcer among us. Instead, we have preserved the master and pupil system as a traditional memento.

“May I ask about your works?” I asked Toda. He restated my word, “work,” in a different word, “product.” “Our products are made for daily use, so we don’t call them “works,” said Toda. His words implied what craftsmanship was. Artisans draw a profound line between the “works” as one’s hobby and their authentic “products.” I regretted unthoughtful my word.

There are many planes of various sizes hung on the wall in his workspace. Among them, I found a lovey, snail like shaped plane. With his permission, I picked it up and looked at that. It seemed to be very handy to round small pieces of wood. It was about time to replace it. I was not aware of array of tools until I heard his saying, “They might look less tidy, but actually they are kept in place, keeping plane’s blades away from each other’s.” What a well-reasoned way! I regretted unthoughtful myself, again. 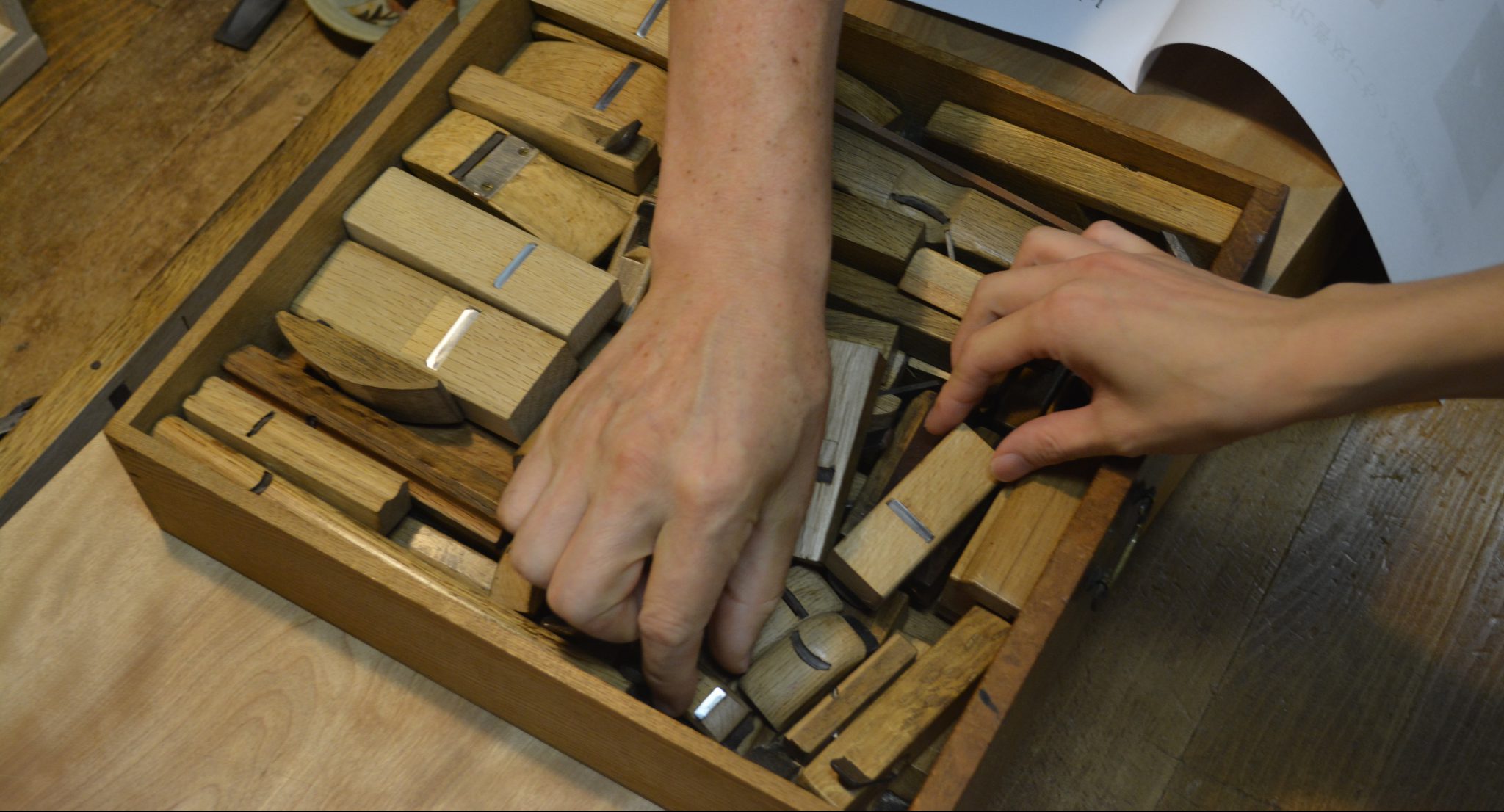 Toda is particular about Mulberry. Mulberry is very hard and durable tree, and also it has peculiar appearance and workability. Because of its peculiarity, its original features are sustained even under severe conditions, such as high humidity or the effects of air-conditioning.

As a demonstration, he showed shaving process, pushing a big plane across the surface of wood. It seemed that artisans need to be strong enough to hold a big heavy plane. Thin wood shavings emerged from the plane. I’ve never observed the plane’s shaving. He also demonstrated to shave a small piece of wood with a small plane.

The next step is polishing the surface of wood in a traditional way. “Recently, high-quality sandpaper has become a possible option. But, I use the leaves of Tokusa, or Dutch rush in English, and Aspera,” said Toda. “Using Tokusa’s and Aspera’s leaves require difficult techniques. The process of making Tokusa’s leaves flat is still difficult for me.” Before polishing wood with Tokusa, Edo Sashimono craftsmen need to take some preparation steps; to soak them into water, unroll and dub them, and then dry them repeatedly. That is really time and labor consuming. “You probably think that I’m saying using the leaves of Tokusa could be the best or the only answer to polish well. Unfortunately, I am not. That is not enough.” What would it take? As the answer, I glimpsed his strong, but veiled craftsmanship in his words. Cool!

After using Tokusa leaves, then the next is Aspera’s. Toda sometimes goes into mountains to get these leaves. According to Toda, using Aspera’s leaves is what we call ancient wisdom. In Edo Shashimono, such a traditional custom has been passed through generations. Amazingly, the part of wood polished in the traditional way, which might have magical effects, was getting to be lustered. 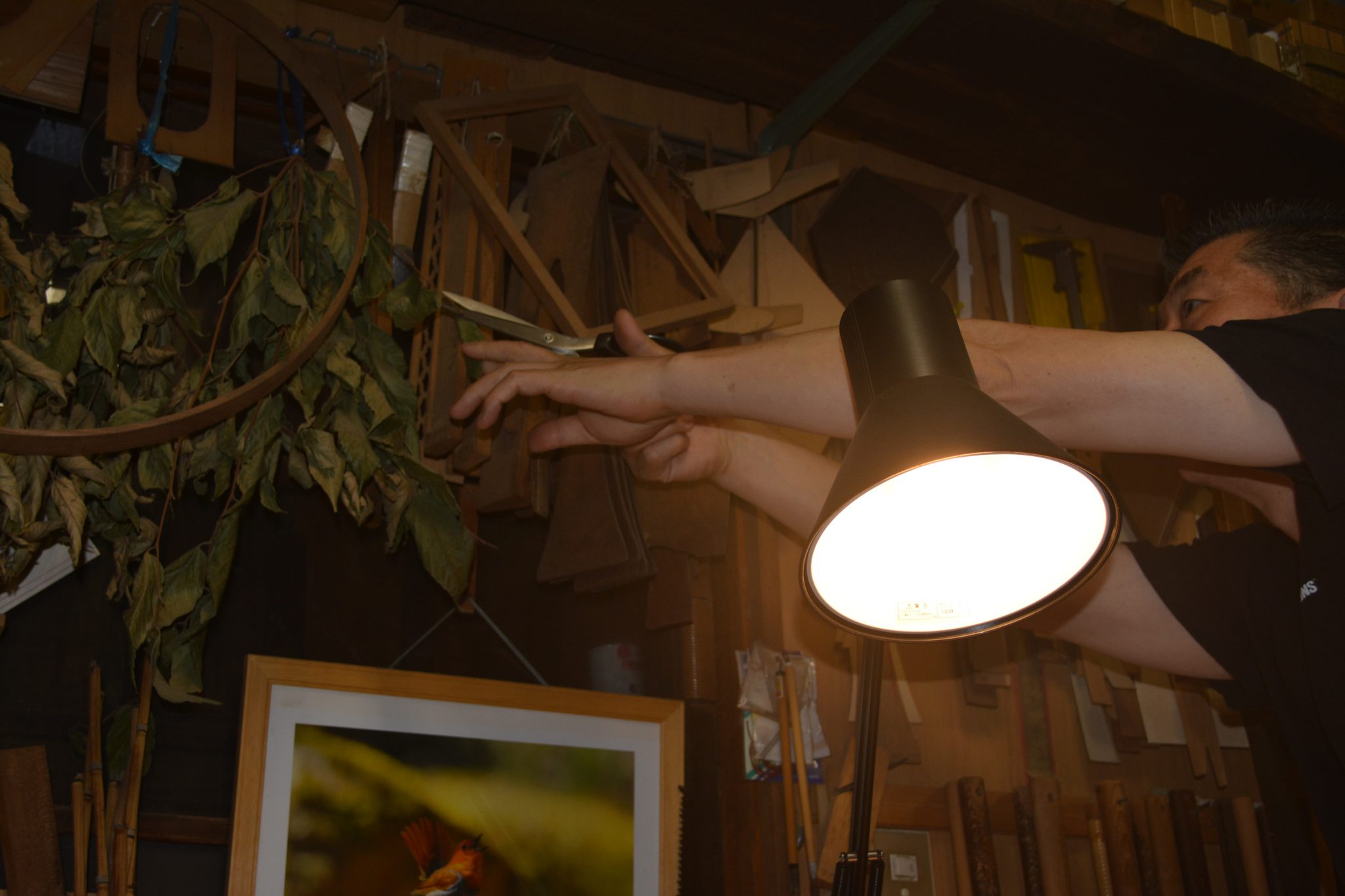 Every single product is created through many traditional steps. In some cases, Toda spends six or seven years to make his products ideal. We, in the present age, are so much accustomed to paying money for ready-made goods at the shop. In spite of this, some people are willing to wait and pay for Toda’s products. Toda’s advanced skills as an artisan allows him to create products to his heart’s content, which let people look forward to those products. Impressing facts, isn’t it?

Toda has kept his working style in the traditional and a careful way. I would say that finding meanings in each careful process is underlying value of traditional Japanese culture. 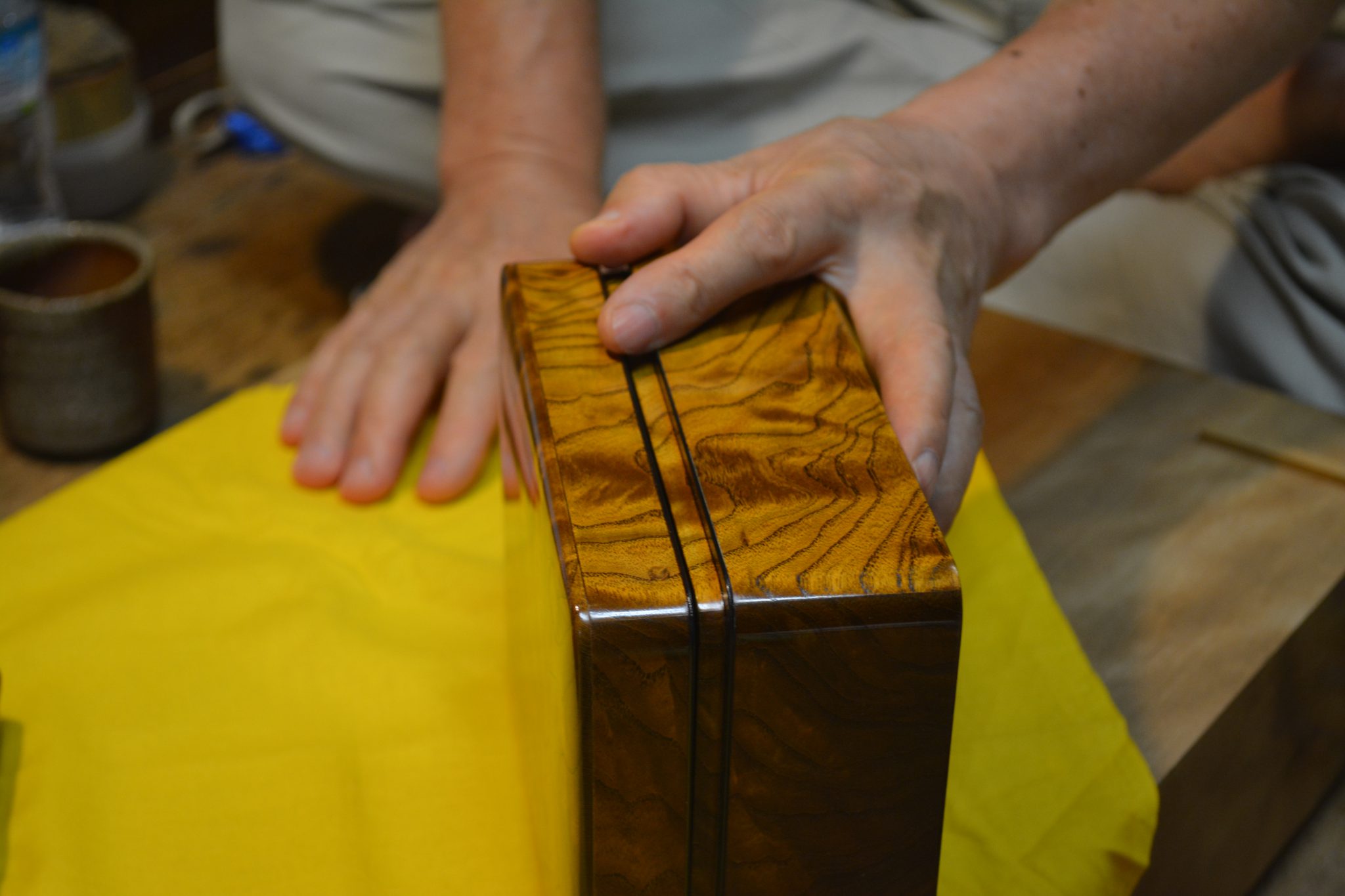 Toda showed me a beautiful shining Mulberry box used to keep personal seals. The best grain patterns of Mulberry were revealed. The wood was glistened with lustrous gold. I saw his perfectly calculated technique on the box.

Before I visited Toda’s place, I had learned about what Edo joinery, Edo Sashimono, master is like from many books and pictures. However, things that I saw and experienced firsthand were definitely more than I had envisioned. I encountered various implements, Toda’s demonstrations of shaving by planes, and another demonstration of polishing with the Aspera leaves. I was very impressed by all.

Apart from his profession, Toda also has given children lectures about Japanese traditional crafts at the education board of Taito district in Tokyo Prefecture. He, for example, makes a pen stand with children to offer them the opportunities to enjoy authentic Japanese culture. They surely can learn a lot from this events.

In addition, Toda is a vice-president of the association for the promotion of traditional craft industries. With responsibilities of this position, his social activities for children are considered as the effort to hand down Japanese traditional culture to the next generation. I really feel I got in touch with Toda’s craftsmanship from this interview.

Picture: Just before this interview, I went to Japan Traditional Crafts Aoyama Square. There are many people from oversea staring rapt at Japanese traditional crafts. 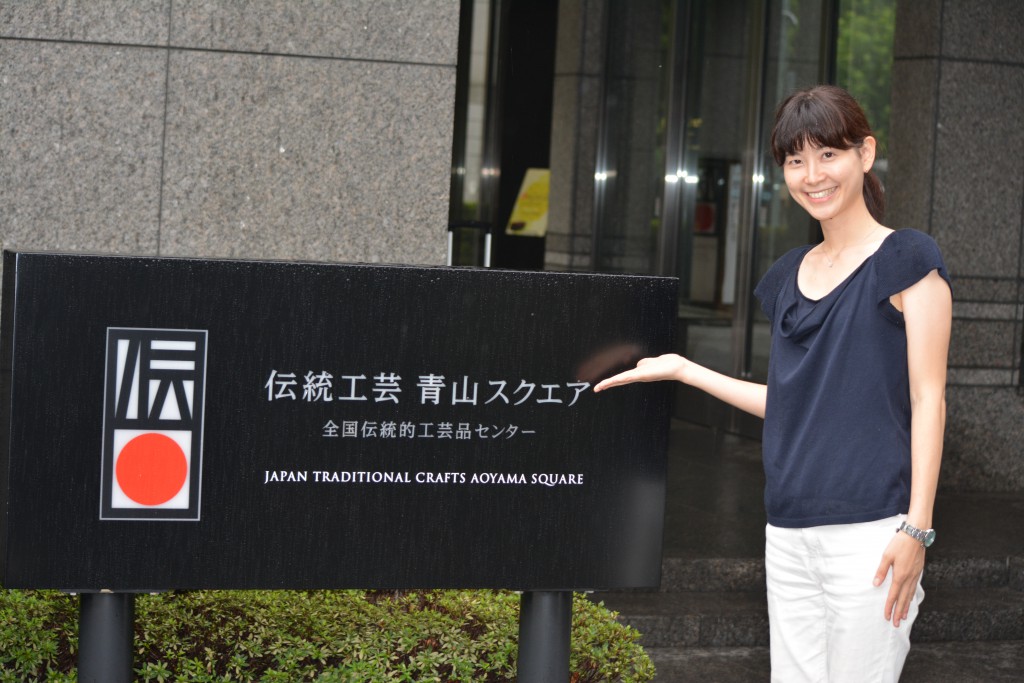 If there is anything we can help you with,
or you have any questions,
please do not hesitate to contact us.