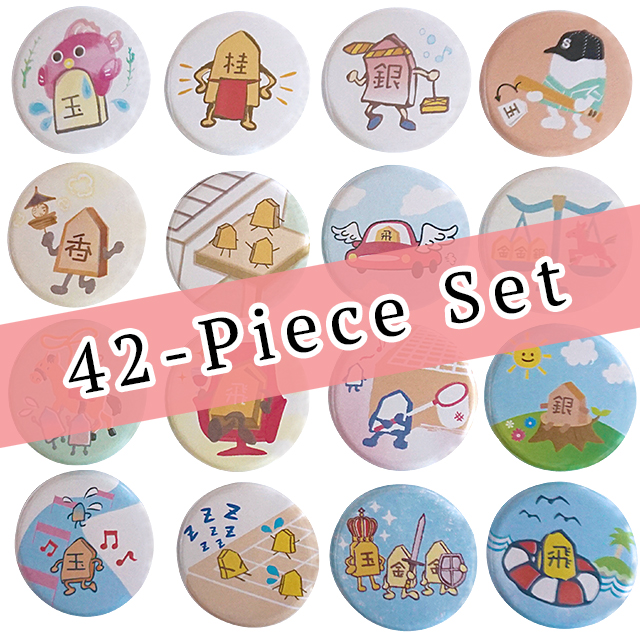 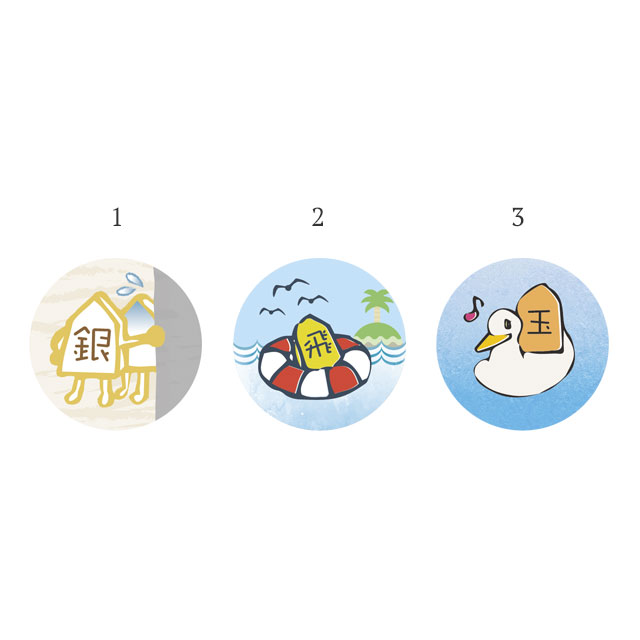 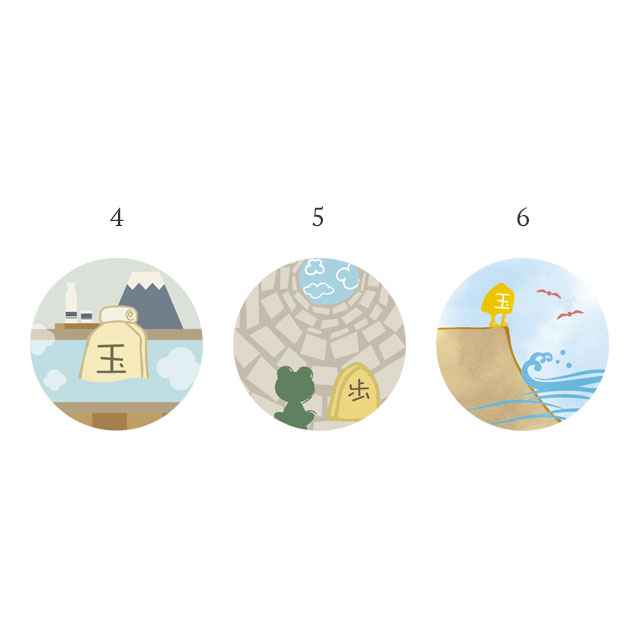 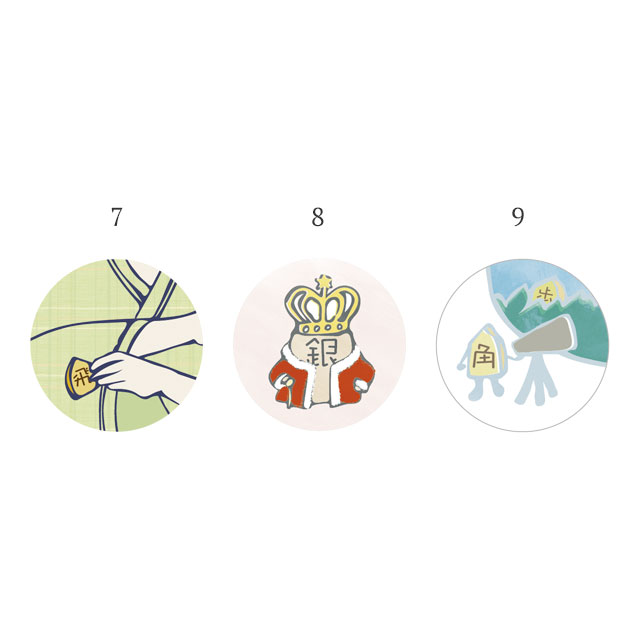 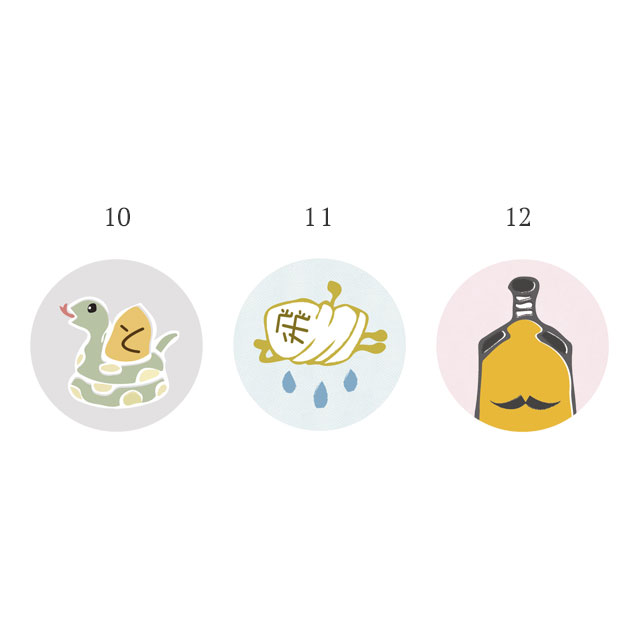 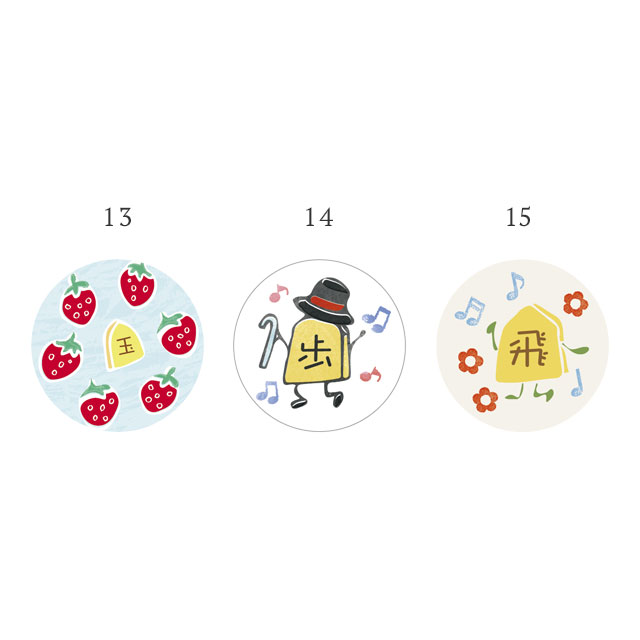 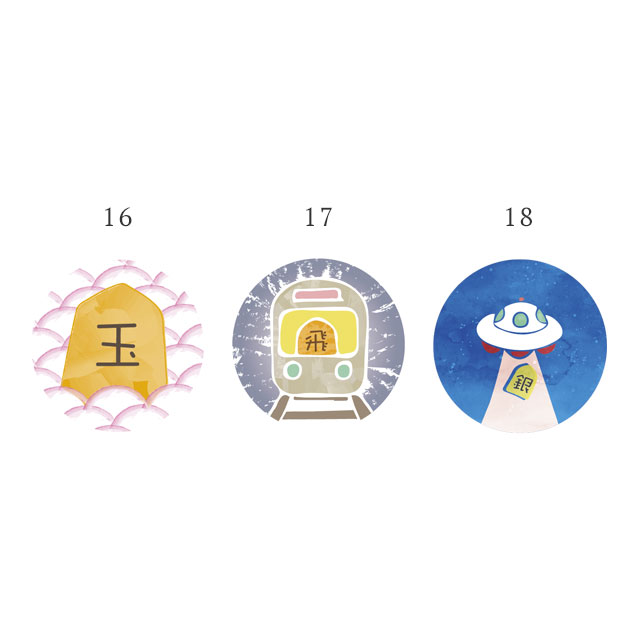 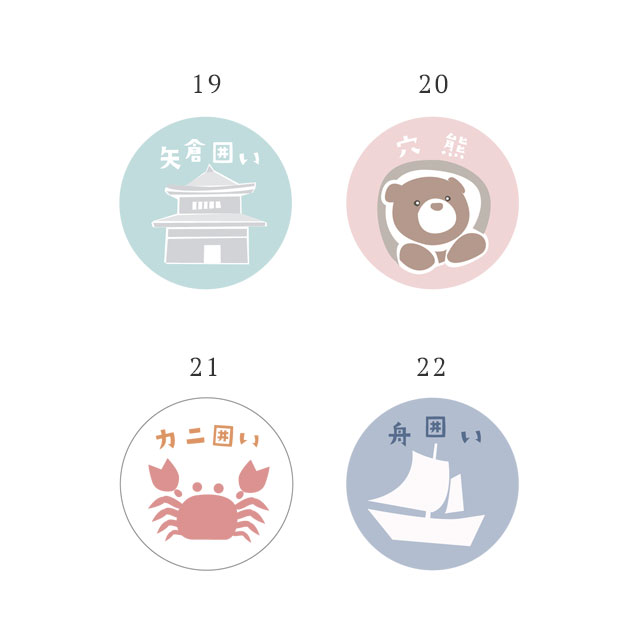 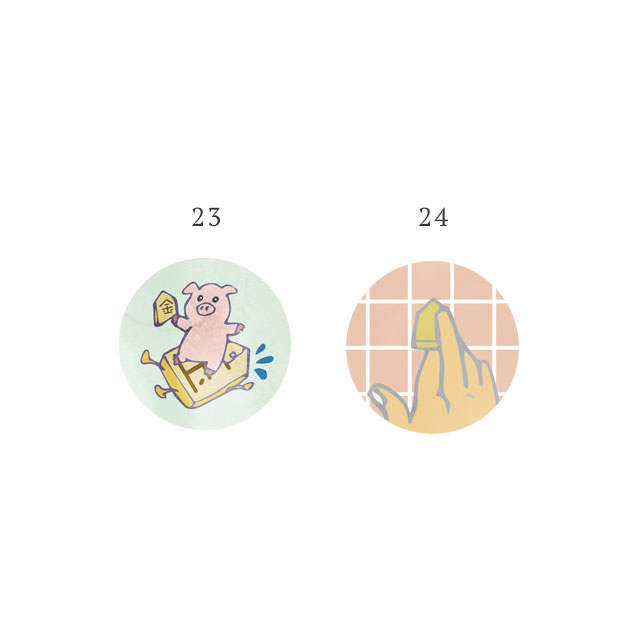 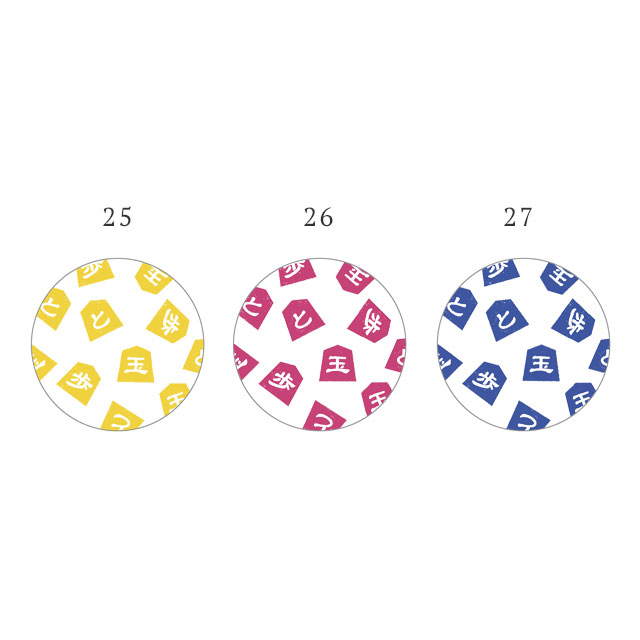 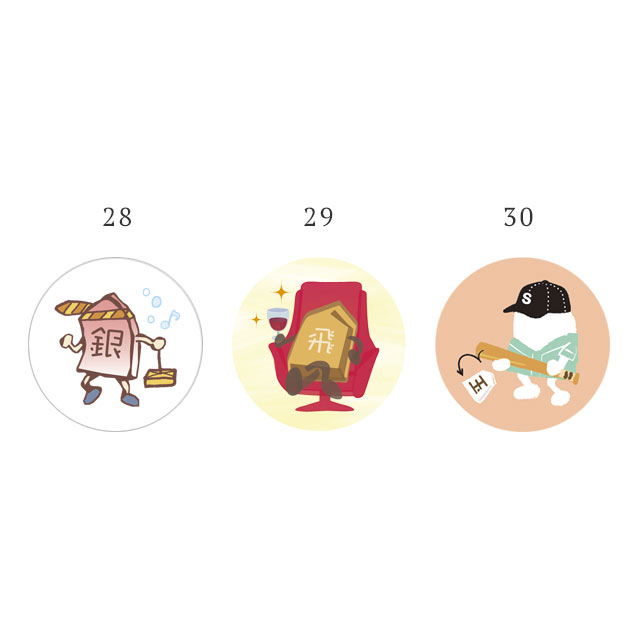 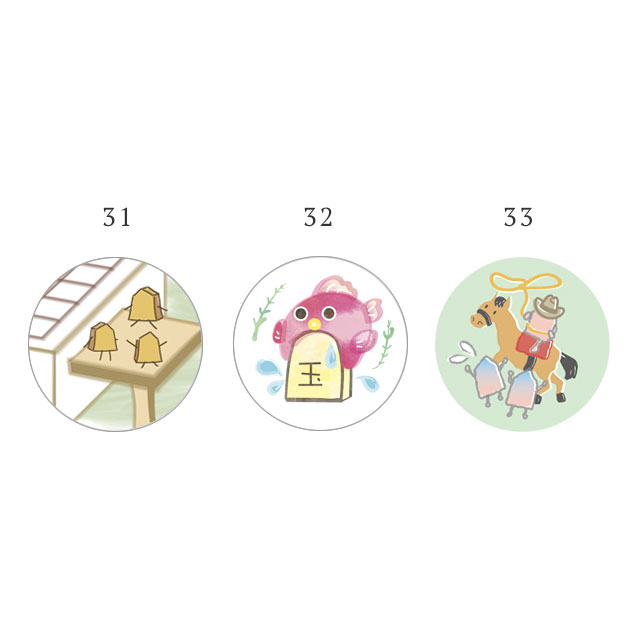 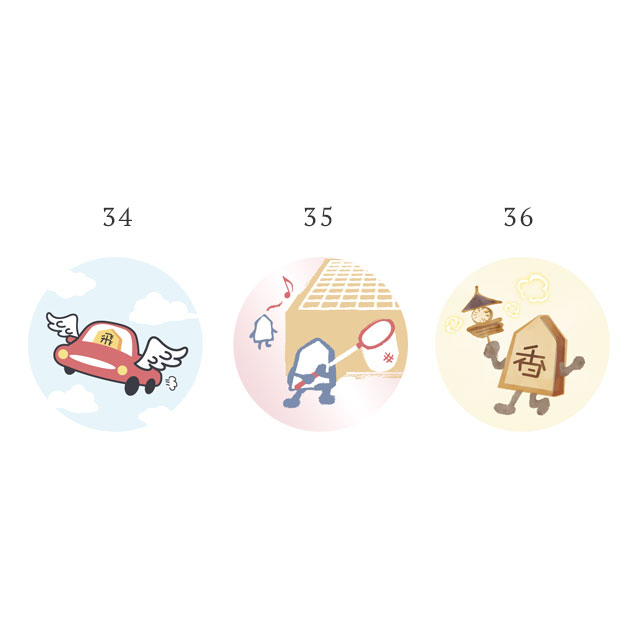 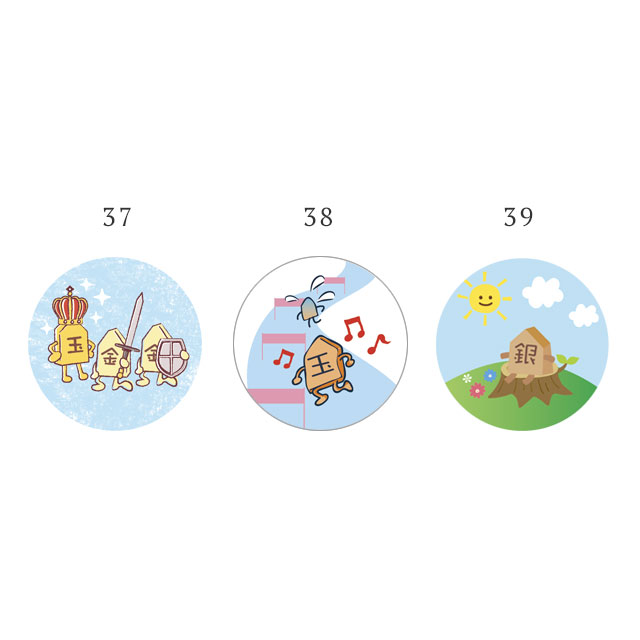 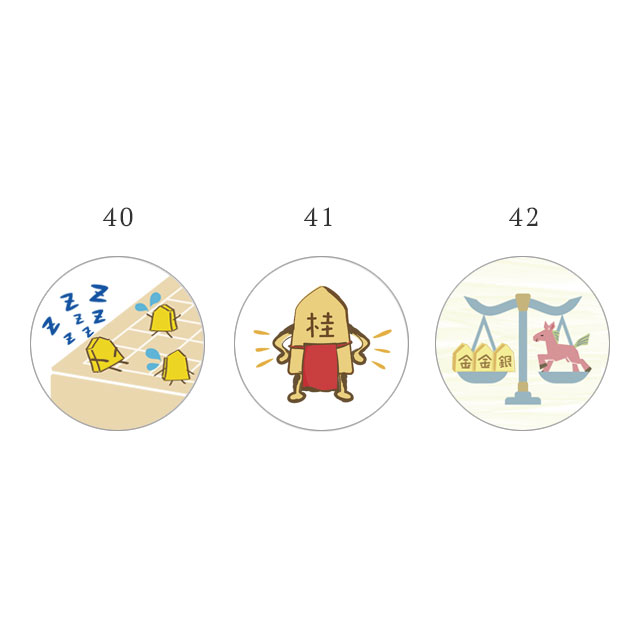 Very popular tin button badges with Shogi words are all gathered together. We would like to offer a special price for this complete set!
Give it a try to use this set as prizes for Shogi tournaments or events!

1: Wall Piece (Kabe Goma)
Your piece is acting as a wall to prevent your own piece from moving.  That situation is expressed with a word, “Wall”, Kabe. A wall piece is considered as an unnecessary piece.  Gin (Silver) often becomes a wall piece, and such Gin (Silver) is called “Wall Gin” (Kabe Gin).

2: Lifted Hisha (Ukibisha)
The situation in where Hisha (Rook) is lifted to the middle ranks, and especially on the 6th or the 5th files.  This situation often occurs with Aigakari during Ibisha tactics are used.  “Lifted Hisha” sounds comfy, doesn’t it?

3: Duck (Ahiru)
This is one of castles where two pieces of Kin (Gold) and two pieces of Gin (Silver) form the shape resembling the legs of a duck.  Because this castle can be built easily, it is good for a fast paced game.

5: Bottom Fu (Soko Fu)
Dropping Fu (Pawn) onto a square on the bottom rank.  It is an effective way to receive the opponent’s attacks.  Literally, “Bottom Fu” refers to a piece dropped on the bottom rank.  It is often dropped directly under Kin (Gold).  A Shogi proverb refers this situation as Kinsoko no Fu iwa yori katashi, Fu (Pawn) dropped right behind Kin (Gold) forms a very strong defense.

6: “Even though you think there is no chance of survival, you have actually survived.”
This is a word of wisdom that the 15th Meijin, Mr. Yasuharu Oyama left.  Even if your Gyoku (King) gets into a scrape, a new path for victory might be set for behind it.  Never give up until the end!

7: Sleeve Hisha (Sode Bisha)
This is one of tactics with which Hisha (Rook) on the second file is shifted to one square left and used on the third file.  This Shogi terminology uncommonly has a name of clothes.

9: Far-seeing Kaku (Tomi no Kaku)
This refers to the act of dropping Kaku (Bishop) in your own camp to aim at the opponent’s pieces from a long distance.  You may imagine a sniper who sneaks to somewhere to attack somebody.

11: Twisting Hisha (Hineri Bisha)
It is a name of tactics in which you twist Hisha (Rook) on the right side to move to the left.  This is very offensive with good mobility to attack swiftly.

12: Topknot Mino (Cyonmage Mino)
One variation of Mino castle.  Fu (Pawn) at the head of Gyoku (King) is pushed to one square ahead.  The name of “topknot” comes from the shape of this castle.

13: Strawberry Castle (Ichigo Gakoi)
Strawberries have seeds on the outside.  Because this castle has also Kin (Gold) and Gin (Silver) on its outside Gyoku (King), it is given the name, “Strawberry”.  This castle is compact and cute, just as its name.

15: Cheerful Central Hisha
The creator of the tactics was always cheerful, so it got this name.  You might want to become cheerful by using this!

16: Kamaboko Castle
Kamaboko is a Japanese food made from boiled fish paste.  The fish paste is clung to a wooden board to form a semi cylindrical shape.  In this castle, Kin (Gold) and Gin (Silver) are clinging to Gyoku (King).  The texture of Kamaboko is not only soft, but chewy.  Like Kamaboko, this castle is not soft at all!

17: Subway Hisha (Chikatetsu Bisha)
This name is used when Hisha (Rook) moves to the bottom and swings largely to the other side of the board.  The standard position for Hisha (Rook) is the second rank from the bottom.  But in this situation, it moves on the lower positions, so “Subway”!

18: UFO Gin
The tactics can be observed in the situation of Aigakari in which both players employ Ibisha tactics.  Fu (Pawn) ahead of Hisha (Rook) moves one step forward and the first player’s right Gin (Silver) moves, swinging from side to side like UFO.

19: Yagura Castle (Yagura Gakoi)
This castle is named because the process of building the castle by stacking Kin (Gold) and Gin (Silver) is similar to build a Yagura.  It is considered to be the strongest defensive position for attacks from above.

20: Bear in the Hole (Anaguma)
Being protected firmly inside the castle, your Gyoku (King) looks like a hibernating bear.  This is the origin of the name.  It is a very firm castle, so that your opponent have to struggle to give Check.

21: Crab Castle (Kani Gakoi)
It is named after the feature that Gyoku (King) moves only to the right and the left.  This castle strong against attacks from above, but not for them from the side.  When you get attacks from the side, let’s move sideways like a crab.

23: Sudden Death (Tonshi)
This is a situation in which your Gyoku (King) is checkmated unexpectedly, after you make mistakes in getting away from or receiving attacks.  Too bad!

25: A Pattern with Piece Design (Yellow)

26: A Pattern with Piece Design (Pink)

27: A Pattern with Piece Design (Blue)

28: Chidori Gin
Japanese Chidori (plover) Ashi means the unsteady steps made by a drunk.  It is called Chidori Gin that you move Gin (Silver) diagonally forward to the right and the left like a drunk’s steps.

29: Takabisha
In Shogi situation, Takabisha refers to the way to play a game, in which you place Hisha (Rook) on the middle ranks to work well in attacking situations. Taka of Takabisha means “high” and bisha comes from Hisha (Rook).   This word, Takabisha, has become in common usage in Japanese, meaning a high-handed attitude.

30: Sending (Okuri)
Sending is one of techniques in which you drop a piece to check Gyoku (King) directly.  It makes the Gyoku (King) take the dropped piece and lose the connection with its difensive piece.  This is a decoy plan, which is effective to capture Gyoku (King) and works well with Hisha (Rook).

31: Hand Piece (Mochigoma)
When you capture your opponent’s piece and it becomes one of your pieces, the piece is called a hand piece.  Hand pieces demonstrate their real power, when they are used. Be careful not to hoard them too much.

32: Gold on the Head (Atama Kin)
It’s one of very common checkmate situations.  You checkmate, placing Kin (Gold) just above Gyoku (King).  Look, not Gyoku (King), but Gold fish is on a Gyoku (King)!

33: Fork (Ryo Tori)
Fork means the situation in which you are attacking two pieces at the same time.  You can capture either one anyway.   Especially, when you are using a major piece to attack, it tends to work well.

34: Hisha (Rook)
Yes, this is one of Shogi piece and children’s favorite.  We drew a flying car, from the meaning of 飛車, Hisha (Rook), written in Japanese.

35: Waiting Piece (Machigoma)
Predicting the Gyoku’s (King’s) escape route, you put a piece to wait Gyoku (King).  When Gyoku (King) closes up the waiting piece, it’s time to capture it!

36: Skewer (Dengaku Zashi)
Kyosha (Lance) is a piece to move any number of squares.  Expressing this feature, it is likened to a stick.  Skewering BBQ materials, skew your opponent’s pieces with a Kyosha (Lance) stick.

37: Peerless Gold (Kin Muso)
This is a name of castle which is mainly used in a double swinging Hisha (Rook).  It features two pieces of Kin (Gold) placing next to each other to protect their Gyoku (King) firmly.

38: Chase Gyoku (Ote ha Ou Te)
Giving Check is inevitable to win a game.  Even so, if you do too much, you may lose your target.  It’s just like relationship issues.  You have to be careful not to be persistent.

40: Idle Piece (Asobigoma)
Asobigoma is a piece that doesn’t work on both offense and defence.

41: Kei Loincloth (Fundoshi no Kei)
Kei (Knight) is a piece that can be used effectively when you aim to fork, because its reaching power influence on both sides.  The shape of a situation in which you are about to fork with Kei (Knight) looks like a loincloth when worn.

42: “Uma’s Defence is worths three generals” (Uma no Mamori wa Kin Gin Sammai)
After Kaku get promoted, it becomes Uma which is powerful in attacking situations.  At the same time, it works well on defence. Once Uma takes a role to protect Gyoku, it is more valuable than three pieces of Kin and Gin. The defence becomes like an iron wall.